Lawrence & Associates remains open during the coronavirus emergency declaration. Although all our personnel are working from home, we are able to do all client meetings, court hearings, depositions, and mediations by phone or videoconferencing. This includes free, confidential consultations for new clients. Click here to watch our video on how we help clients during the COVID-19 Pandemic.

Will My Insurance Cover Me for the Injury I Got in a Hit-and-Run? 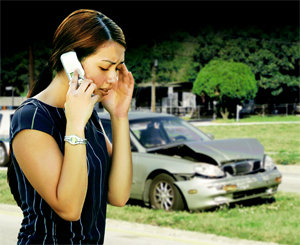 The attorneys at Lawrence and Associates have helped many drivers who were hurt in a hit-and-run collision. These claims can be simple – for example, when the hit-and-run driver is found by the police and has alcohol in his or her system – or complex – for example, where the hit-and-run driver is never found at all. In almost every case, our attorneys can recover money from an insurance policy to fairly compensate our clients for their damages. However, in many cases the insurance carrier will initially refuse to compensate the injured driver. Depending on the exact circumstances of each case, there are several ways to get paid for your injury.

What Happens When the Hit-and-Run Driver is Found?

What Happens If the Hit-and-Run Driver is Not Found?

It is tougher – but not impossible! – when the hit-and-run driver is never found, but the wreck caused an injury and property damage. In that scenario, Kentucky law states that the injured driver’s insurance policy has to pay first using the uninsured motorist coverage portion of the policy. However, in doing so the injured driver’s insurance carrier becomes adversarial, meaning the insurance company wants to save its money by not paying for the injury! Insurance companies often delay or deny claims by requiring proof in painstaking detail for each and every dollar the injured driver needs for fair compensation. Often, a different, more hostile adjuster is assigned to the case and the injured driver expecting the customary friendly service from his or her carrier is taken by surprise. In Northern Kentucky, most injured drivers without counsel are never aware that they receive less than full compensation because of these factors.

What Happens If Another Driver Causes the Accident but Never Hits My Car?

The most difficult scenario occurs when hit-and-run driver is avoided, but still causes an accident. For example, Lawrence & Associates has represented drivers who struck a tree or telephone pole when swerving to avoid a negligent driver, only to see the negligent driver flee the scene without stopping to help. Although getting money in this situation is not always impossible, it is extremely difficult to recover when there is no contact between the vehicles and no identification of the other driver. Nevertheless, good legal counsel improves your chances of recovering. At the very least, good legal counsel can give you the finality of knowing that a recovery is not possible.

Can Attorneys at Lawrence & Associates Help Me Get Money?

Lawrence & Associates is Working Hard for the Working Class, and we would be happy to help you. Our lawyers are licensed in Kentucky and Ohio, and have experience in helping all kinds of car accident victims recover fair compensation for their injuries. If you’ve been injured in a hit-and-run accident, let us help you!