Lawrence & Associates Accident and Injury Lawyers, LLC > Blog > Bankruptcy > How Do I Know if that Debt Collection Call Was Really a Scam?

How Do I Know if that Debt Collection Call Was Really a Scam?

Did the IRS Really Just Call Me About Past Due Taxes? 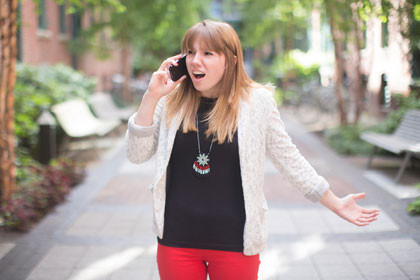 Between January and April of 2015, many Greater Cincinnati residents began receiving phone calls (sometimes automated) from callers claiming to be IRS representatives. These calls were especially common in Northern Kentucky. The calls stated that the person being called owed unpaid and past due income taxes. The caller then demanded that the taxpayer give up personal information – including a social security number – and sometimes demand that the taxpayer make an immediate payment on the balance owed.

If you receive a call like this, it is a scam. The IRS has held a press conference on this, and has publicly stated that they do not make phone calls for past due taxes owed. Instead, the IRS sends letters. Further, the IRS generally avoids filing lawsuits related to past due taxes. Instead, the IRS will often seize any future tax returns, because this allows them to be repaid without having to pay an attorney. Don’t fall for this scam!

Can I Go to Jail for a Past Due Debt?

Many Greater Cincinnati residents receive phone calls from debt collectors threatening jail time if a debt is not paid. The debt collector will state that failure to make a payment by a certain date will result in a sheriff or the state police arresting the debtor and taking them to prison. Many Cincinnati and Northern Kentucky residents become so afraid of prison time that they go without food in order to make a payment.

This is a scam; debtor’s prison was outlawed centuries ago. While it is true that fraudulently incurring a debt can land someone in prison in both Kentucky and Ohio, unwisely taking out a debt simply is not fraud. In fact, in the thousands of bankruptcies this law firm has filed over the years, we have never once seen a client charged criminally for fraud. So rest easy – there is no jail time for accidentally getting behind on a payment. The sheriff’s deputy will visit you if you are sued, but this is only to serve you with the complaint from the civil suit. If you are sued civilly, that just means the creditor wants money from you. And if you are sued civilly, Lawrence & Associates Accident and Injury Lawyers, LLC can help you take care of that lawsuit by filing a bankruptcy.

Bankruptcy Foreclosure Scams – Can you Save Your Home for $800?

If your home has never been foreclosed upon, you’ve probably never seen this scam. But anyone in the Northern Kentucky area that has been served with foreclosure papers can probably recite this scam by heart. Usually in a snail mail letter, or sometimes even in the local newspaper, companies will offer “mortgage assistance” or “foreclosure counseling” – two very vague terms that really mean nothing. The letter will offer to work out the mortgage arrearage by having the homeowner sign a deed over to the “foreclosure counselor,” or by transferring a fraction of the interest in the home to another person in bankruptcy. By doing so, this company promises that attempts to foreclose on the property will stop.
This is also a scam. Yes, attempts to foreclose on the property will stop for a while. But you can also lose ownership of your home. Further, the foreclosure will only be stopped temporarily at best. Once everything is sorted out, and assuming the homeowner still has a home, the foreclosure will proceed. This type of scam has gotten so bad that the federal government has written a report warning homeowners about it. Never sign a deed without consulting with an attorney first, under any circumstances! And never believe that your foreclosure will be permanently stopped without making plans to repay the arrearage on the mortgage.

Bankruptcy Can Legitimately Stop the Problems These Scams Claim to Stop

If you are on the receiving end of any of these scams, you probably have real financial problems. Financial problems that cannot be resolved by setting up a short repayment plan with a creditor are nearly always best solved by filing bankruptcy. Remember, the most common reaction of most Northern Kentucky residents upon filing a bankruptcy is wishing they had investigated the possibility before sinking their time and money into poorly thought out financial “solutions.” Lawrence & Associates Accident and Injury Lawyers, LLC can help Northern Kentucky and Greater Cincinnati clients file bankruptcy and stop the harassment. Call us today and learn how we can help you!