In 2014, among all the states, Kentucky reported the 5th largest number of All Terrain Vehicles (ATV) accidents and Ohio reported the 12th largest. ATV accidents can cause severe physical damage and leave victims without insurance coverage. A standard homeowner’s insurance policy will cover ATV accidents, but only in certain locations. 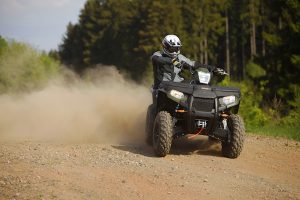 Insurance Coverage for Accidents on Land You Own

Insurance Coverage for Accidents On Land You Don’t Own

A standard homeowner’s insurance policy provides some liability coverage for the insured of the policy when an accident does not occur on the insured premise, however, there are exceptions. One exception comes from the phrase “arises out of the premise.”

When the injury occurs off the premise, the critical question for the courts becomes: what caused the accident? Both Kentucky and Ohio have ruled that the phrase “arises out of the premise” only relates to physical properties of the land. For example, if you are riding an ATV in your neighbor’s field – with permission – and you drive over a large hole, which causes the ATV to flip over resulting in personal injury, Ohio and Kentucky have ruled this accident “arises out of the premise” and your homeowner’s insurance could deny you coverage.

However, the same courts have ruled that the phrase “arises out on the premise” does not apply to accidents involving negligence. For example, if your neighbor and you are riding ATVs in your neighbor’s field and your neighbor drives too close and hits your ATV, which causes the ATV to flip over resulting in personal injury, Ohio and Kentucky have ruled this accident does not “arises out of the premise” and your homeowner’s insurance would provide coverage.

The courts distinguish the two incidents by defining the phrase “arises out on the premise” as requiring the land be “casually related to the occurrence.” Meaning, if the land is defective, and you do not own the land, then your homeowner’s insurance will not cover the accident.

Relief may still be available if the accident does “arises out on the premise,” but it would be the result of litigation against the landowner.

Do I need ATV Insurance in Case I Get Injured in an Accident?

In Ohio and Kentucky, ATV insurance is not required, but due to homeowner’s insurance’s limited scope of coverage, you may want to consult an insurance agent.

Some states require that operators have proof of ATV insurance on them at all times when driving on federal or public land. Ohio and Kentucky do not have this requirement, but neighboring states like Pennsylvania do. Additionally, Kentucky does not require the owner to register their ATV with the state, but Ohio does. Therefore, if traveling between states it is best to check the laws of that state to determine if licensing or insurance is required.

If you’ve been injured in an ATV accident and have more questions, don’t hesitate to give us a call. We’re Working Hard for the Working Class, and we want to help you. Get a free consultation today!