A few weeks ago, a Lawrence & Associates Accident and Injury Lawyers, LLC blog discussed the interplay between marriage and bankruptcy. At the time, Kentucky and Ohio were two of only four states in which courts had upheld bans against same-sex marriage, and we noted that a case before the United States Supreme Court could change the status of same-sex married couples in a bankruptcy:

At this time, same-sex couples are not allowed the right of marriage in either Kentucky or Ohio and therefore do not get the benefit of filing together. They do not get the cheaper filing rates of opposite-sex married couples, although the rules regarding household income are the same. The United States Supreme Court is currently considering this issue, so that rule may change. If so, we’ll update this blog in a different post to reflect that change. 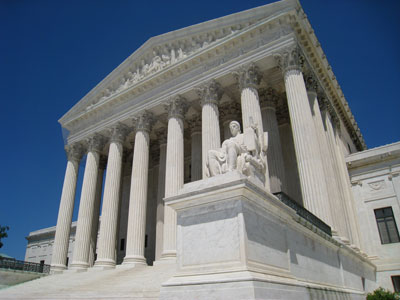 Last week, the United States Supreme Court ruled in Obergefell v. Hodges that same-sex couples have a right to marry under the United States Constitution. This landmark decision, similar to Brown v. Board of Education decades ago, advanced the goal of equality for all American citizens.

What Does this Mean for Bankruptcy Filers?

What this means for you depends on who you are. If you are not in, or about to enter, a same-sex marriage, then this ruling has no effect on your rights whatsoever. However, if you live in the Northern Kentucky or Southern Ohio areas, are in, or about to enter, a same-sex marriage, and are considering filing bankruptcy, then you have gained rights that had been previously denied to you. Insofar as it relates to a Chapter 7 or Chapter 13 bankruptcy, you now have the right to file together, with only one filing fee. (This applies to both attorney fees and court costs.)

You will also be recognized as one household by the bankruptcy court once you have been married. By contrast, couples that are just dating are treated the same as roommates in the same household. Married couples, however, must list their spouse’s income on their bankruptcy, even if the spouse is not filing. This has no effect on the spouse’s credit, but it does affect one’s ability to file for a Chapter 7 bankruptcy. A Chapter 7 debtor must be under median income for his or her household size in the state in which he or she lives. Household income includes a spouse’s income regardless of whether the spouse files. Thus, a same-sex couple may be forced to file a Chapter 13 bankruptcy where before they could have filed separate Chapter 7s.

What Does this Mean for Those with an Injury?

In Workers’ Compensation, spouses of an injured worker do not have a claim for damages, so nothing will change for Workers’ Comp filers. In Personal Injury claims, however, a spouse historically has a right to damages called loss of consortium. This is the loss of the injured person’s household services, affection, ability to have sex, etc. Same-sex married couples are now going to be afforded the same loss of consortium rights that other married couples have enjoyed for centuries. Loss of consortium is a small factor for small injuries (and in fact can be worthless in many small injury claims), but is a major factor for major injuries, sometimes totaling millions of dollars. The adopted children of same-sex couples also enjoy a version of loss of consortium based upon the loss of a parent’s affection, or vice versa.

Being recognized as a same-sex couple can have beneficial or negative effects on any court action. At Lawrence & Associates Accident and Injury Lawyers, LLC, we give free consultations on all our cases. Please call us to get more information on how the Obergefell v. Hodges case applies to your legal proceeding. We take pride in representing Northern Kentucky and Greater Cincinnati couples. If you are getting married and have questions about bankruptcy, please give us a call today!